Over-Easy (a.k.a. OE) and I went for a walk on a recent summer morning and decided to stop at Batch Bakehouse. Batch is located at the corner of Dickinson and Williamson Street. OE has a soft-spot for chocolate croissants and wanted to see if they had one. Boy did they have a chocolate croissant — and so many other goodies!

The case was filled the a huge variety of delicious looking pastries and breads. I am a carb addict and this place looked like heaven to me! Everything was displayed on pretty plates with hand written signs at various heights. The place seemed squeaky clean and the staff was very nice and accommodating. One of the girls was just getting off work and was getting some treats for herself. She pointed out some her favorites too.

Somehow we resisted ordering one of everything and shared a pain au chocolate (chocolate croissant) and it was DELICIOUS!

It tasted super fresh and the chocolate was outstanding. On our way out the door, I drooled over what I’ll try next time we stop by. I can’t wait to taste the ham & gruyere croissant or one of their mini-pies (I’m a sucker for a good pecan pie!). Pie is an acceptable breakfast food, right?

Bonus: They have a chart on their website listing which days certain breads are available. I’ll for sure be going on a Sunday to grab a loaf of Sourdough and some Pretzels. 🙂

Rating: Even though we’ve only tried one thing from Batch Bakehouse, we’re giving them ONE DOZEN EGGS.

Best chocolate croissant I’ve had and we can’t wait to go back!

For more information on our rating system. Click here.

Over-easy and I had been wanting to try Crema Cafe on Monona Drive for a while. Every time I googled “Best Breakfast Places in Madison” (which happens more often than you’d think) Crema was on the list but I hadn’t heard anyone talking about it. Bonus: it’s pretty close to our house. We were set on seeing what the hype was about for ourselves.

We arrived at 10:30 AM on a Tuesday. I figured we’d miss the breakfast rush, but the restaurant was three-quarters full! Walking in, the small cafe seems like a neighborhood spot. Some people were there with friends, others were working on computers and there were families enjoying a late breakfast as well.

The decor was simple and a little vintage. They had a nice mix of vintage diner-style tables and wooden tables. Personally, I’m not into matchy-matchy things so I liked the personality the decor showed.

We ordered from the counter and were given a number.

We decided to start with an order of Doughnut-Muffins because not only did they look scrumptious, but we’d never seen anything like them. We had to give ’em a try.

I don’t know if Doughnut Muffins are a thing — but after tasting these, I think they should be. They were delicious and sweet. Not dry or overly sugary. They were perfectly sized for a breakfast appetizer (which, I think, should also become “a thing”). I can’t wait to bring these as a treat to work or to a friend’s house (plain doughnuts are so over-done anyways!).

Over-Easy is an avid iced-mocha enthusiast. So, of course, he ordered one. He was pleasantly surprised at how good the mocha was. He thought it had a nice espresso flavor and the ratio of chocolate syrup to milk to coffee was just right. In fact, the iced-mocha at Crema Cafe is in the running for “Best Iced Mocha in Madison” (watch for that blog post… coming soon!).

Our breakfast was brought to our table fairly quickly for how busy it was. 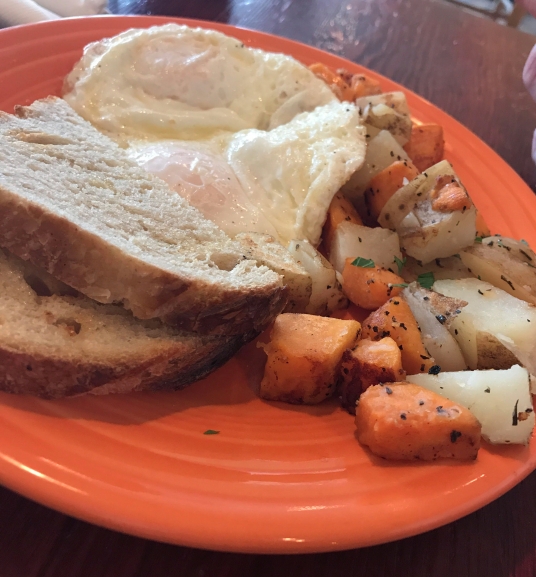 He prefers his eggs over-easy (obviously), chose sourdough bread and it came with sweet potato hash. He thought that the over easy eggs were good but nothing special. The hash was good as well but he would have preferred it was cooked a little longer so it was slightly crispier. The sourdough toast was delicious. All-in-all it had good flavor.

I’m a sucker for a good breakfast sandwich, so that’s what I ordered. 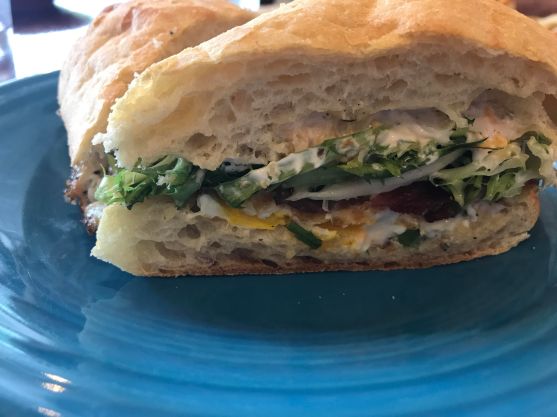 It was a fried egg with local-smoked bacon, cheddar-herb cream cheese, frisee on ciabatta. The bread was delicious. I thought the egg-to-ciabatta ratio was a little off. The egg could have been a little bigger to match the size of the bread. However the egg was cooked perfectly — I like it a little bit runny on a breakfast sandwich. The cheddar-herb cream cheese was super creamy with a good, but strong, flavor. The greens on the sandwich were really fresh and crunchy. I would definitely order this sandwich again.

One thing we really enjoyed about Crema Cafe was that they used a lot of locally-sourced ingredients and even had a list of local farmers and producers on the wall.

Rating: Overall, we give Crema Cafe 9 out of a dozen eggs for their weekday breakfast.

We are looking forward to going back to try their lunch and expanded weekend brunch menu! Over-Easy will be back really soon for another iced-mocha too.

Have you been to Crema Cafe? What did you think? Which menu items are your favorites?